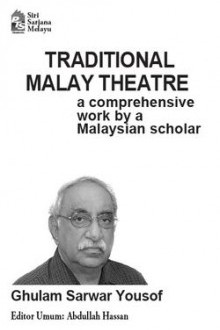 Dato’ Dr.Ghulam-Sarwar Yousof holds a degree in English from the University of Malaya and a Doctorate in Asian Theatre from the University of Hawaii. He is Malaysia’s most distinguished scholar of performing arts, and one of the world’s leading specialists of traditional Southeast Asian theatre. He set up the country’s first performing arts programme at Universiti Sains Malaysia in Penang. Currently he is Senior Academic Fellow in the English Department, International Islamic University, and Expert/Pakar at the Cultural Centre of the University of Malaya. Apart from traditional theatre, his academic interests include classical and modern Asian literature, literary theory, epics, comparative religion, mythology aesthetics and mysticism. Dr. Ghulam has been actively involved in national and international cultural organizations. In 2005 he prepared the official documents on behalf of the Malaysian Ministry of Culture for submission to UNESCO to gain recognition for the Mak Yong Dance Theatre of Malaysia as an item of the Oral and Intangible Heritage of Humanity. He also served as Malaysia’s representative and Board Member of the Asia-Europe Foundation. Currently, he is a member of the Penang Heritage Board set up following the recognition by UNESCO of Georgetown as a heritage city. He is the author of more than a dozen volumes of academic work, the best-known being the Dictionary of Traditional Southeast Asian Theatre (Oxford 1994), Performing Arts, Volume 8 of the Encyclopaedia of Malaysia (Editions Didier Millet 2004), and The Heritage of ASEAN Puppetry (Sena Wangi 2013). His literary works include several volumes of poetry, drama and short stories.